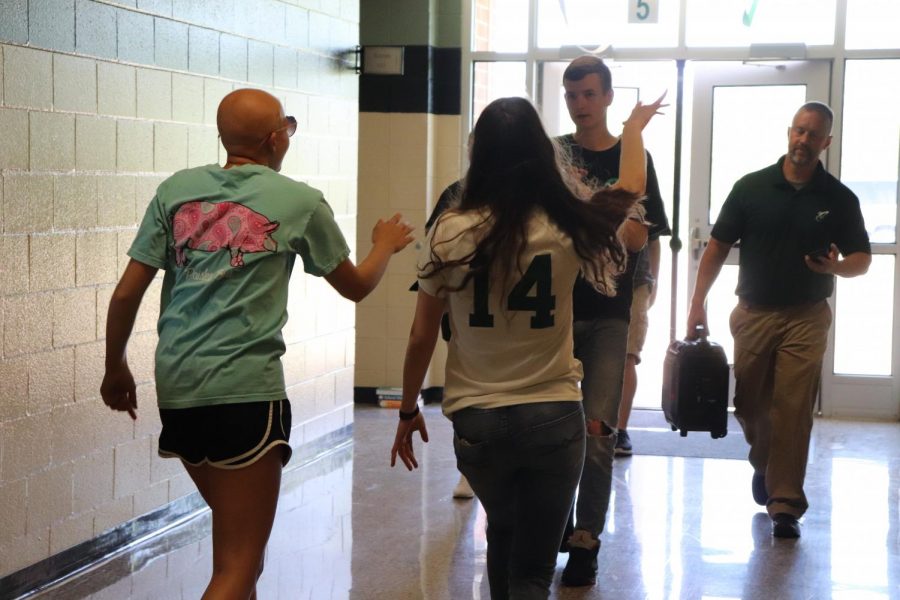 Cass Martin (12) and Hannah Kimmel (11) lip sync their portion of the Lip Dub project as Austin Thomas (10) films and Mr. Kevin Gustafson (Faculty) carries a speaker with the music.

On Tuesday May 7 the faculty and students at James Buchanan High School showed what being a Rocket is all about during their morning activity period.  Students in Mr. Kevin Gustafson’s (Faculty) Sports and Entertainment Marketing classes planned a Lip Dub in which the whole school participated. Every club, sports team, student and faculty member were shown off in the lip-syncing video.

Students in the class stayed after school Monday to decorated the halls with balloons, streamers, and posters sporting our school colors and cheering on the Rockets to show off during the video. Also, most students wore green and white to show school spirit, representing their various organizations.

“Coach G had the idea last year and showed us a couple of different schools doing lip dubs, which made us decide to plan our own,” said Madison Bailey (11). 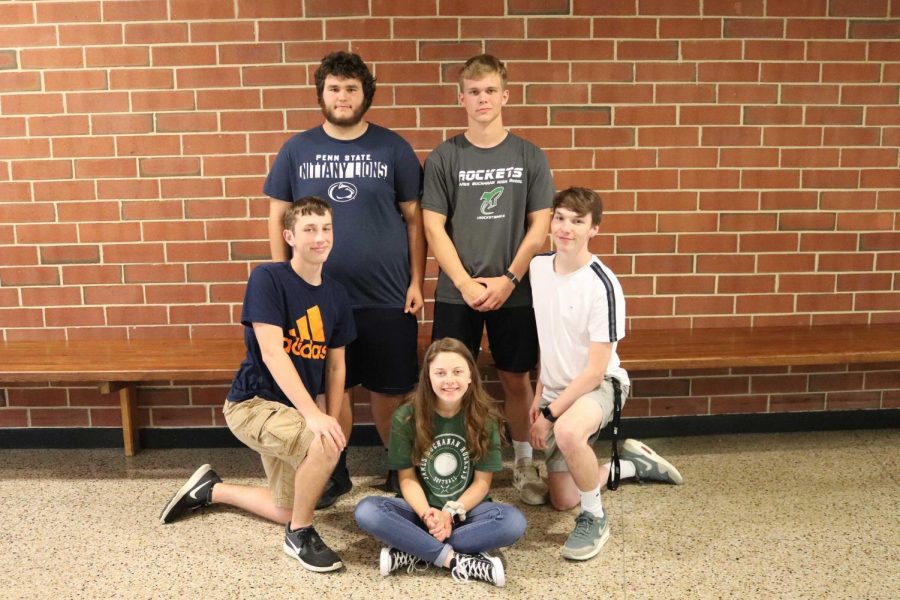 Many people helped plan the Lip dub to make it run as smoothly as possible. Each club or sport was assigned to an area in the hallway. As a mashup of popular songs played over the loudspeaker of the school, students from Gustafson’s class filmed each club and sports team.

“We had to first start with songs,” said Bailey. “Considering what songs were the most popular and unblocked from the United States on YouTube.”

A map of where the clubs and sports teams were supposed to stand helped keep everything organized. A designated singer was assigned to certain areas in the school that walked through as each song played.

“Most of the student body was involved,” said Trenton Bradley (12). “We welcomed all clubs and sports teams to participate and we trusted them with the freedom to do their own act.”

There was even an activity period where everyone spent time practicing for the Lip Dub to work out some small kinks before the actual video was filmed.

“We even timed all the different switches between hallways and turns and began to place clubs in their different areas on the map,” said Bailey.

After all the clubs and sports were featured in the Lip Dub, everyone sprinted to the gym for a miniature pep rally where teachers and students did the wave and cheered. The drum line also pepped up the crowd for the video while the basketball team dunked to show our school spirit as a grand finale in the Lip Dub.

The Sports and Entertainment Marketing Class is now working on the editing process. They have to put all the clips together and add the music to make the final product.

“Expect to see the Lip Dub within the following weeks of filming,” said Bradley. “Definitely before the end of the 2019 school year.”

When the finished product of the Lip Dub project arrives, the James Buchanan student body will see all the work, planning and editing put in to make this happen.

“It was a lot, but between the two Sports and Entertainment Marketing classes and students, it became a huge success,” said Bailey.