A Day In the Life Of Mr. Poe 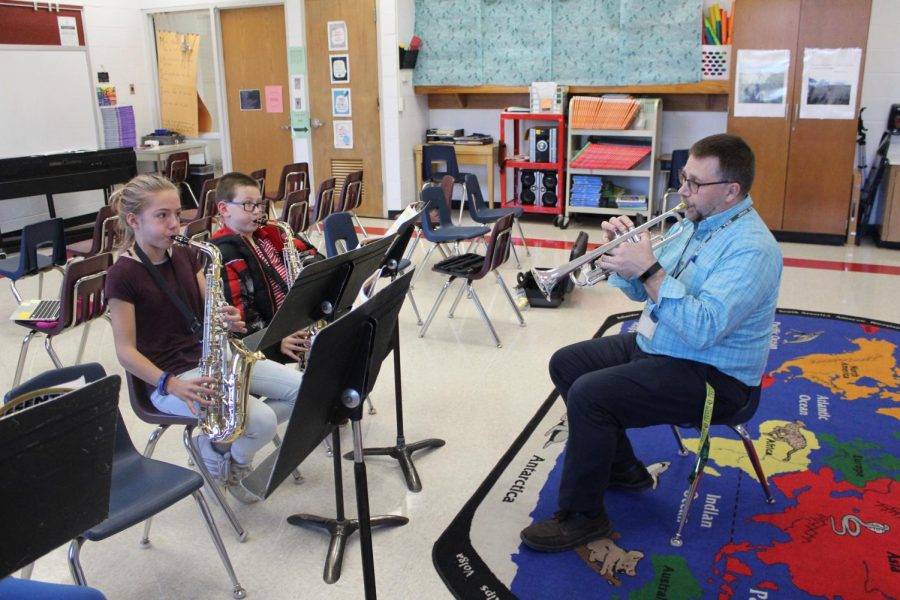 When you think of your teachers, you probably think of them staying in one classroom, teaching the same class throughout the day, but that’s not the case for Mr. Eric Poe (Faculty).

For eleven years, Poe has been the James Buchanan High School’s Chorus teacher. Throughout his day he travels to three different schools, teaches five different classes, and instructs kids ranging from fifth to twelfth grade.

Starting out his day on Tuesdays and Thursdays, Poe reports with Messa Voce, a special choral group, to the high school at 7:15 AM. At this time, they rehearse chamber, more classical repertoire, and popular, or “pop” music. The popular music they put to choreography.

First period, Poe teaches high school Chorus. During this period, some students have band, so he and Mrs. Sheryl Deike (Faculty) have to trade the students off every other day, having a “full Band” one day, and “full Chorus” the next. Here, they practice music for their Chorus concerts. 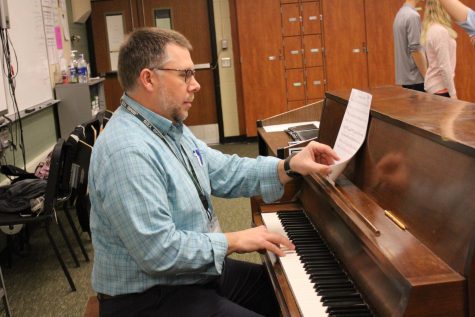 Messa Voce returns to Poe second period. Most days, he mainly focuses on Messa Voce, but on Wednesday he rehearses with the Five-Point Band, Messa Voce’s music ensemble.

Everybody in Messa Voce is encouraged to try out for District Chorus, and most make it to County Chorus. Since these activities are at the beginning of the year, during that time they mainly focus on the music for that appropriate activity. When not working on that, they’re working on their concert music.

Third period, Poe teaches AP Music Theory. This class involves teaching students the mechanics of music. He teaches notation to his students, as well as ear training, to get them prepared for the AP test at the end of the year.

Period four, Poe not only has his lunch period, but also his planning period. While simultaneously eating his lunch, he also sends emails, writes his lesson plans, and completes anything else he needs to before 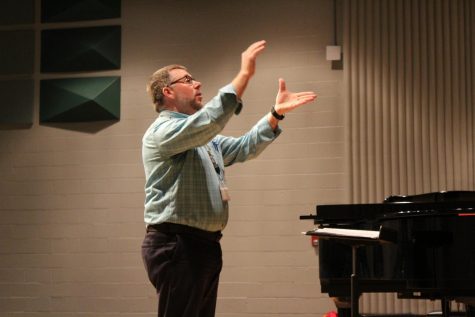 he heads down to the middle school around 12:30 PM. By getting there early, he has to have enough time to prepare the auditorium and get organized before his students come.

“There’s a lot of different things happening during that period [middle school activity period], so it’s hard to get the students to our practice,” said Poe.

At the middle school, Poe teaches not only seventh and eighth grade Chorus, but also sixth grade Chorus. Like the high school, the middle school Chorus period also has Band that happens at the same time. In addition, this period serves as a free period for students to do make-up work and attend other clubs. Sometimes Chorus only gets to meet once a week, and with everybody asking to leave and signing out, it takes up around ten minutes of his period, making it go from forty to thirty minutes. At times, this period is one of the most stressful times of his day, according to Poe.

Around 2:15 PM, Poe heads either to Mountain View or St. Thomas Elementary schools to teach Beginners’ Band. He brings his trumpet along to show students how to play the different rhythms and what the notes should sound like. Many of his students ask how to play the notes and the correct finger positioning of them. At 3:15 PM, his students are picked up and he is able to go home.

“I’m not complaining, I just want my colleagues to understand,” said Poe.

Although Poe has a crazy, busy day, he gets satisfaction from being able to teach so many kids and bringing music into their lives.