Brooms, Mops, and Dustpans Oh My!

The Truth Behind How The School Gets Clean 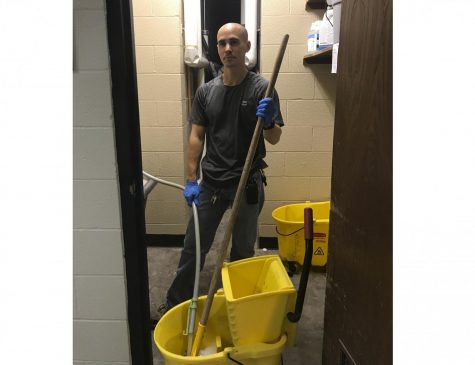 As the bell rings, the students file out the door onto the buses, leaving the mess that is left over from the day behind. The real question is, who is in charge of cleaning the school preparing for the next day? A team of seven janitors work day and night to clean and sanitize the school to ensure the health of everyone here.

“If you like what you do, you never work a day in your life,” said Cole. “I love what I do, I wouldn’t trade it for the world.” 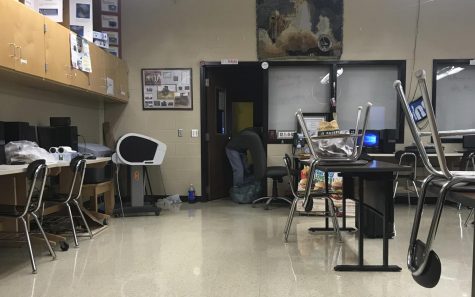 Growing up in southern New Jersey, he went to a local college for an Asian and Latin degree. After completing his degree, Cole served a couple years in the New Jersey Police Department and realized it wasn’t for him.

“If you don’t see yourself retiring from the job, then what’s the point in working?” said Cole.

Cole then got a job as a janitor at an elementary school in south Jersey. When starting this new job, he realized that being a custodian was for him. The faculty and staff liked him so much that they invited him to class celebrations at a local beach.

“Being a janitor is very rewarding, said Cole. “You see a difference in what you’re doing start to finish.”

Taking a trip to Gettysburg, Cole fell in love with the area of Pennsylvania, intrigued by the scenery and historical aspect of the community. Leaving his hometown, he went house searching for the right match for him. After a long search, he found a house in the community of Mercersburg with a short commute to work. Cole heard about the head custodial position on a listing the school posted. With previous experience, he knew that he fulfilled all of the qualifications.

“I just wanted to be happy,” said Cole.

Starting in May, school was coming close to completion. Cole was trained by the other janitors in the school, they showed him what needs to be done and how to do it. With summer quickly approaching, he had multiple jobs that had to be completed before school started. One task was to move everything out of the classrooms into the hallway, so that they could strip the floors and wax. They also were in charge of draining the water out of the pool to clean and disinfect from the year prior. One staff member touched up and repainted some spots of the school. The cafeteria tables are also deep cleaned, cleaning the pipes and underneath the tables, using the special “gum knife” to remove all the multi-colored spots.

“It’s hard to be a perfectionist when there is so much to do,” said Cole.

With school starting up again, a routine that seems to change every day was put into place. Coming into school around 2:30 and clocking out at 11:00, Cole starts off his shift with filling mop buckets, so that he can sweep and mop, assisted by a fellow janitor on the same shift. After the cafeteria is swept and mopped, they both move on to the 300 hallway referring to themselves as the “300 hallway pit crew.”  Going into each classroom, they spray each desk with sanitizer, letting it set to get the best results. In the meantime, they also sweep and collect the trash.

“We all enjoy the disinfection and the health aspect of cleaning,” said Cole.

After completing the classrooms, they move onto the library repeating the same process. On the list to complete is the lobby, main bathrooms, nurse’s office, athletic trainer’s room, and the faculty room. Each night, they also spray a certain chemical onto the wrestling mat to ensure all harmful bacteria is gone. Responsibilities might be added when team members are out, as well.

“Every night is different,” said Cole. “You have to plan yourself around what is going on in the school.” 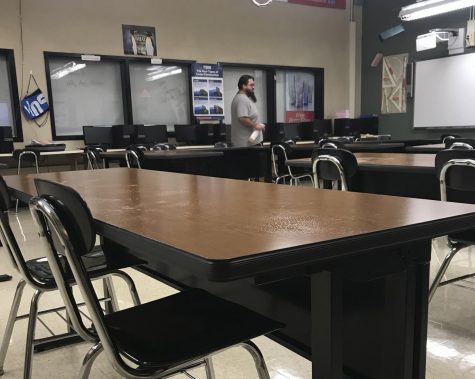 The janitors are responsible to clean up after events, such as sporting events and musical concerts, and sometimes their cleaning process is interrupted by other events taking place anywhere in the school. “Adapting and overcoming every situation” was a phrase Cole repeatedly said.

Students in extracurricular activities form friendships with the janitors as they pass them on their way to their practice or activity.

“One time, I was singing in the hallway, and he [Cole] joined in,” said Abby Carbaugh (12). That was a memory she liked since it made him so approachable and they both laughed about it.

People sometimes don’t notice that the spill made the day before is cleaned, or the pile of pencil eraser dust is off the floor. Lots of behind the scene work is completed daily to ensure the health and wellbeing of each individual student.